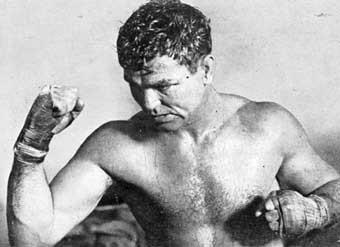 Yesterday I posted this quote from Jack Dempsy on Facebook after a friend shared it with me:

“Too many amateur instructors have forgotten entirely that the purpose of boxing lessons is to teach a fellow to defend himself with his fists; not to point him toward amateur or professional competition with boxing gloves. To a menacing extent the major purpose of fistic instruction has been by-passed by amateur tutors who try to benefit themselves financially, indirectly or directly, by producing punchless performers who can only win amateur or professional bouts on points.” – Jack Dempsy, Championship Fighting, 1950.

What struck me, him, and no doubt you too, are the parallels with modern karate. From the off, we should be clear that Dempsy is not criticising the sport of boxing in and of itself. As a champion boxer himself, that should be obvious. It is also very clear when your read the quote in the context of his wider observations. He is simply stating that the increased popularity of the sport, and the resulting boom in boxing gyms, has caused some problems in boxing as a whole. So, I don’t see this as a “anti-sport” quotation, and that’s certainly not why I posted it, but it does raise two key issues we karateka can relate to:

1 – Karate has also forgotten that its purpose is self-defence.

That is why karate was originally created. It was, to quote Anko Itosu, “a way of avoiding injury by using the hands and feet should one by any chance be confronted by a villain or ruffian.”

As societies became less violent, the need for martial arts as self-defence diminished. To keep them relevant to the times, the potential benefits in physical health and character development were then emphasised (the “do” movement i.e. kendo, judo, aikido, etc get things rolling and then “karate-do” hops on the bandwagon). Later on, sporting versions the art were also developed. And while all of this is very valuable, it does tend to obscure the original nature of the art.

You can see this “obscuring” most clearly when it comes to kata applications. We have the widespread misunderstand that kata is a choreographed and impractical “fight” against fellow karateka. We also have kata done for its own sake and not as one element of a holistic combative methodology.

“When people don't have a reality check they have this really stupid tendency to make up a reality check.  'Make up' and 'reality' rarely belong in the same thought.  I almost always pick on karate for this.  When I look at their kata and kihon, they have possibly the best body mechanics for infighting that I've seen... then they choose to test it at sparring range, where it sucks.”

It's an observation, from a non-karateka, that squarely hits the nail on the head. Kata is for infighting (specifically close-range civilian altercations), but that has become obscured and karateka try to apply it at “sparring range”, where it does indeed “suck”. We then have people saying kata does not work; whereas, in truth, what they should be saying is, “my misunderstanding of how kata is supposed to work does not work”.

We need to return to being clear about karate’s original purpose; and the kata that encapsulate that purpose.

2 – Karate has lots of “punchless performers” too.

Traditionally, karate is supposed to adhere to the dictate of “Ikken Hissatsu” or "to annihilate with one blow". This is widely misunderstood to mean we only hit once! However, the truth is that the concept refers to the ever-present intent of ending the fight NOW! Not with the next punch, not in a few seconds, but NOW with the technique we are doing NOW.

If the technique fails, then we are immediately in a new NOW (that’s how time works) and we should still be seeking to end things there and then. Marc MacYoung has his own version of “Ikken Hissatsu” when he states that physical self-defence can be summarised in three words, “Him, Down, Now!”.

One key thing we need, to be able to fulfil the Ikken Hissatsu dictate, is true punching power. My experience is that most martial artists don’t punch as well or as hard as they think. I often remark that there is a whole new level of hard that most martial artists are oblivious too. Many define “hard” as the power generated by the “least worst” striker they have personally experienced.

Peter Consterdine 9th dan is certainly a practitioner of “true hard”. I have been a student of Peter’s for a long time (Peter awarded me my 6th dan) and I’ve enjoyed seeing the revelation of true hard that many martial artists experience the first time they hold a pad for Peter. In one moment of true impact they redefine what “hard” is and realise their previous definition was very wrong. That needs to spread. We should all be seeking true hard, and not what passes for “hard” in most of today’s dojo and gyms.

It amazes me how many karateka don’t use impact equipment. In those cases, “power” becomes synonymous with “crispness”. People punch the air in a crisp way and they are told their technique “looks powerful”. However, power can only be truly tested and experienced when strikes actually collide with something.

Line work has its place in karate. It’s good for developing body awareness and refining motion. However, we should be spending much more time hitting things and working with actual partners. I would suggest that the ratio of the ingredients is off in many dojo.

When I’ve said this in the past, many think I am endorsing crude, muscular power over their “sharp” technique. That’s hugely telling in and off itself! On some level, they must know that their arbitrary defined “good” is inferior to brute force when it comes to power generation … and that’s about a poor as karate can get.

Power is not a muscular thing, or a size thing, it’s a technique thing. Objectively good technique will generate huge amounts of power in an efficient way. Indeed, we should not label a technique as being “good” if it does not do that.

We should all be seeking true impact.

If karate is to continue the trend of returning to being the effective system that it was originally intended to be – which is necessary for its continued growth – then we too need to avoid the same pitfalls that Jack Dempsy observed in 1950s boxing.

While the sport, physical health and personal growth aspects of karate are all extremely valuable, we need to be clear that teaching those aspects alone will obscure karate’s true nature. We need to remember that self-defence is at the core of karate. In doing so, that brings the need to be able to hit truly hard front and centre. While it is possible to pass through the ranks (of groups that don’t test striking power as they should) and it is also possible to have competitive successes without ever being able to hit hard, self-protection demands that skill. It’s therefore a travesty that developing true power is not as emphasised as it should be today; and as it was in the past.

Great post, I found myself nodding in agreement throughout. An additional thought I would like to add is that often it seems that what karate IS is often forgotten in favour of what karate can be, even when training for a more practical self defence approach. By this I mean that karate IS a striking system. Yes we have grappling, joint attacks, throws and more but karate IS a striking art. With that in mind if impact skills are not developed on pads then the karate being practiced is already being compromised to the point where I ask is it even karate (at least for the original intention of civilian self defence). Also any pad work practiced should be in context of self defence, not a sporting exchange of bluff & counter, correct use of pads leads onto live practice, which in turn compliments our practice of concepts drawn from kata. An example would be from my Naihanchi boxing system - hook punch at close range is received at close range (from the opponent), I ride and redirect the energy. The opportunity to apply a lock at the elbow is available but surely the option of disrupting posture to strike to the jaw would serve better (think morote uke)!! If the opponent is able to disrupt said morote uke then the limb disruption is still available - but impact through strikes to, in this case, the jawline should always be first option for self defence of a most serious nature. So then, pad work MUST be practiced and it MUST adhere to the concepts, context & scenarios to which we claim to train for. Just a few thoughts.

Mark B wrote:
Great post, I found myself nodding in agreement throughout.

Mark B wrote:
Also, any pad work practiced should be in context of self defence, not a sporting exchange of bluff & counter, correct use of pads leads onto live practice, which in turn compliments our practice of concepts drawn from kata.

Good point. I agree with that when we are talking about bunkai, “old-school” karate and self-protection (as we are here). As you point out, lots of people disconnect their pad-drills from their kata, and the context of self-protection, to instead work on the pads as a full contact fighter would.

We can also practice “fighting” pad-drills too, but we need to be clear that the objective has now moved way from self-defence / old-school karate, and we are now talking about a consensual fight with a fellow martial artist. Personally, I like to drill, train and teach both … but I am always 100% clear on context.

Mark B wrote:
So then, pad work MUST be practiced and it MUST adhere to the concepts, context & scenarios to which we claim to train for.

Train right and there is little chance of mixing up self-defence and fighting in application, as some fear, because their natures are so radically different. However, if we mix them up in training, then we get big problems with people defaulting to inappropriate method for the scenario being faced.

Back to the original post: we also get problems if we forget that karate is, at its heart, a method of civilian self-protection. The kata that form the core of karate make no sense unless that key fact is understood. We can train the other aspects too … the problem is when those other aspects present themselves as the “root” and not the “branches” that they are.

Does Peter Consterdine still produce content? I recall he had a few videos years ago but his current web presence seems to indicate he's gone silent. Atleast on the web.

PeterConsterdine.com for example is basically a skeleton. Looks like the last time anything was done to it was 2015.

As active as ever! He writes a monthly column for Martial Arts Illustrated, but it’s been a while since any new DVDs have been made. The website has now been superseded by this one: http://www.thecombatgroup.com/

I know I'm late to this party, but I wanted to say that this is an excellent post. Thank you.

Dillon wrote:
I know I'm late to this party, but I wanted to say that this is an excellent post. Thank you.

Delighted that you think so :-)