Interesting article about John L Sullivan, bare knuckle brawler/boxer.  I found his guard intersting, his hand positioning looks somewhat like Wing Chun (Im not a practicioner, only commenting on what little I know about Wing Chun) http://afflictor.com/tag/john-l-sullivan/

That type of guard was pretty standard in bare-knuckle boxing--searching the names of pretty much any famous boxers of the pre-Queensbury era will come up with pictures/drawings depicting that guard. It's hardly something that Wing Chun has a monopoly on :P. In Okinawan karate, we call it meotode gamae ("married hands posture") or tekko gamae ("steel turtle posture"). Here are some karate examples--Seikichi Odo, Chibana Chosin, and Motobu Choki: it is interesting that it is used as a guard I also thought it looked more like a stand up grappling hold. both hands seizing limbs/clothing to one side of the opponents centre line as oppose to a more central position where you would have one hand on each side of the opponent 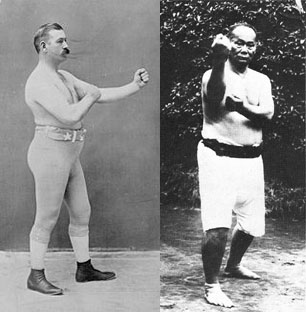 There are a lot of similarities between “old boxing” and “old karate” I find; both in terms of their methodology and subsequent evolution. If you look at the picture of Sullivan and Motobu in this post you can see that the guard, stance and foot positions are very similar. And I think that’s what you’d expect as both are practising a bare fisted system that is not limited to just punching.

I also can’t help escape the feeling that the masters adopting this guard are taking it from western boxing? Guards are primarily for duelling / consensual exchanges; which is why we don’t see guards in the karate of the kata; which is self-protection / non-consensual violence focused (as stated by Itosu, Motobu, etc). Perhaps when looking for an effective “duelling methodology” the past masters borrowed from boxing? The guard of boxing would be a good fit due to the commonalities of the arts at that time.

When we seek to fight each other, then distance and foreknowledge of the dynamics of any exchange come into play. So we hold our hands in a “ready position” at a distance, in anticipation of what is likely to happen, because we are too far away for the hands to be active (unlike in self-protection) and we know with a good degree of certainly what is likely to come our way and how it will come our way because the opponent has a very similar skill set to our own (again, unlike in self-protection).

The guard of old boxing was a good fit for the skill set of old karate when shifted across from self-protection to a duelling context. These days, there is big difference due to the continued evolution of both boxing and karate, but at the time the arts had a lot in common.

I wrote an article around this a while back:

Here is another old article on “Guard” positions:

This extract is the relevant bit:

“If you've ever seen any photographs or illustrations of the bare-knuckle boxers of the past, you'll have immediately noticed that their arms are held much lower than the boxing guard of today. It can be tempting to assume that the guard of the bare-knuckle boxers was simply a 'mistake' that has been corrected by the passing of time. Not so! The hands were deliberately held low because that was the most effective position to hold the hands at the time. Why? Because the 'rules' made it that way.

In the boxing of the past, no gloves were worn and it was perfectly acceptable to grapple and throw (see my 'Throws for Strikers' book). Another important rule difference was that the rounds were not timed, as they are today, but were deemed to have ended when one of the combatants hit the floor. Because of this rule, boxers generally avoided getting too close and opening themselves up to throws. The emphasis was therefore firmly on straight punches thrown from a distance. Also, because the combatants didn't wear gloves, the modern practice of covering up and 'hiding' was far less effective. The favoured defensive option was to parry the punches, and to make parries work you need the space and time to react. The boxers fought further apart than they do today and the front hand was held in an extended position in order to deflect punches before they got too close to the head. The increased distance and the need to frequently use parries are the reasons why the old-style boxing guard had the hands lower and further out.

As time passed, the rules of boxing changed. Because throws are no longer a part of boxing, and because the gloves can provide good protection, boxers tend to fight much closer and make much greater use of close-range punches like hooks and uppercuts. We can now see that the guard evolved as the rules changed. We can also see that the 'most effective' guard depends upon the prevailing rules and environment. It is what works best in any particular environment that determines the most effective guard position. There is therefore no such thing as a generic 'best guard', just the best guard for a given scenario.”

A very interesting topic this! Thanks for kicking it off and the contributions.

I guess there is a question of how much are the photos posed for? To play devils advocate what application is behind this pose: Solid uppercut with an unusual hikite?

Not meaning to detract from a very good thread but still images are not always the best source of information.

Not meaning to detract from a very good thread but still images are not always the best source of information.

I’d agree that image alone can be misleading, but we need to remember they are often surrounded by supporting text to explain that image. And even when they are not, we are still aware the masters shown above were demonstrating martial methods. I’d therefore say that the “duck test” would generally apply:

On the subject of animal based metaphors, I’d also say the following would apply too:

“If you hear hoof beats, think horses not zebras”

(The above assumes you live in the UK and not the plains of Africa!)

I therefore think that the bodybuilder in his pose has enough additional information around it that we can be sure it’s a pose to show of his musculature. Additionally, I think we can be pretty certain that what is been shown in the above pictures is a fighting guard (even if there was no text to support that).

I totally agree that we need to be cautions about being definitive on the basis of an image alone though – and the example you provide is a good one to illustrate the point – but we can still have confidence in stating what is “almost” certainly shown in photos such as these.

Is it not also possible that some of these masters were posing with Morote Uke from the katas which we generally assume has different uses such as trapping and striking,  as opposed to a simple guard?  That is what I thought when I first saw them.

It's certainly possible that they are merely posing with a technique from kata, and of course it has a wide variety of uses. That said, it looks an awful lot like Motobu also used it a guard position, too. See his student on the right:

See Motobu on the left:

Motobu on the left:

Motobu on the left:

Motobu on both the left and right:

Wastelander, thank you for that.  There is clearly use of guard by Motobu and or his partner.  It is also fascinating to contemplate the possibility that these masters could have been copying the poses of western boxers!

It is clear from the quotes from some masters that their karate was aimed at self-defense.  This would not necessarily warrant much emphasis of the use of guards which would probably be used only briefly at a certain distance and before employing the probable tactic of going in and taking the initiative.

However,   there are many references to challenge matches in Okinawa which were presumably fights with some sort of rules,  and I wonder how much influence,  if any,  this different context could have had on the regular training and even the katas

The challenge matches you are referring to are called "kakedameshi" which, if I remember correctly, means something along the lines of "spirit testing." From what I understand, these matches were initiated by both parties taking up meotode-gamae (the position we are discussing) and crossing the wrists of their lead hands. While this is a form of sport fighting, it forced the range to remain quite close, and facilitated the use of the tuidi, nage-waza, and atemi-waza of karate. Personally, I do not believe this "guard" posture came from Western bareknuckle boxing any more than I believe the hip throw came from judo--just because it seems more prominent in one art, doesn't necessarily mean that art invented it and was copied.