Pre-Registration required by the 12thof November 2011 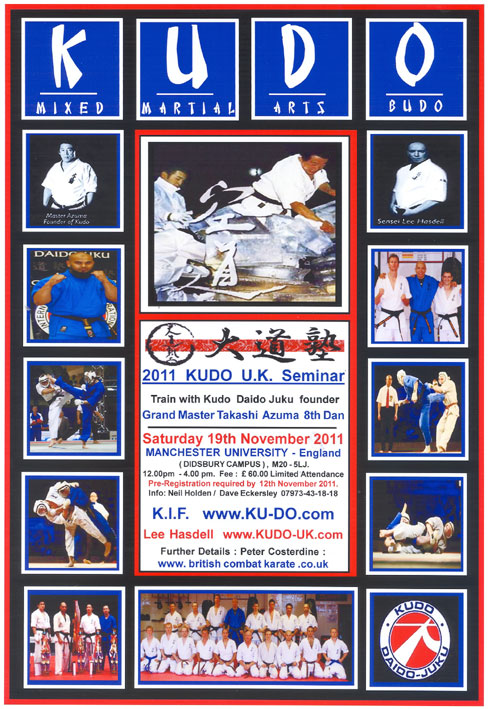 We’re very pleased to announce that Grand Master Azuma, founder of Daidojuku Karate and Kudo is visiting this country and will be holding a seminar and Grading in Manchester on Saturday 19th November.

As you are aware from previous emails, I’ve become Kudo’s most ardent fan and won’t be missing this privileged opportunity to train with the founder of the system.

Those of you who may want to grade will have the opportunity and this will also be the start of the programme in the UK for developing a U.K. Kudo Squad.

If you follow the link below, this will take you to poster for the event, under Members-Events-Event Posters.

To book a place contact Neil Holden, or Dave Eckersley on the number shown on the poster. Places will be limited, so don’t delay.

I believe Kudo is the ultimate combat sport and self defence fighting system.

I have shared this on my Facebook page, looks really good

I would love to attend myself, not too sure if my NGB Licence will allow it lol

Is anyone from the forum planning on attending this event?

I plan on attending.

Sadly this event has been cancelled.

We regret to inform you that the Grand Master Azuma seminar has now been postponed, due to unforseen circumstances.

In 2012 Grand Master Azuma will be very busy promoting the participation of KUDO in International World Games and Combat Games, and the preparation for the 4th World Tournament.

Although Jukucho is extremely busy organsing KUDO events world-wide, we hope that we will see Grand Master Azuma in the U.K. in the near future.

The 2011 KUDO U.K. course of 6 Master-Class seminars with Shihan Lee Hasdell, held at Okami Dojo - Wolf Gym ( Warrington / Manchester ) will continue. These are open to anyone that has an interest in KUDO.