I know I usually share some of our Waza Wednesday videos here on Iain's forum, when they are regarding bunkai or drills, but this one is a bit different. After nearly 4 years, we are ending the weekly video series that my late Sensei and I started. We are proud of having been able to continue his project in the year since his passing, and hope that the videos he and we have made were helpful to people who watched them. This video is more about our Sensei than about a specific technique, but maybe you will get something out of it, as well. Thank you!

Hi Wastelander. I'm sure that Richard is very proud of you and students, he must of been a great person. It is sad that Waza Wednesday is coming to the end, it was a part of my weekly routine. Wishing you all the best, Les

That’s a very moving video. A fitting testament to a special man whose influence will ripple throughout the lives of countless people. The words and experiences of Richard’s students show his was a life well lived.

Personally, I met Richard a few days before he entered hospital. Before then, we’d chatted a few times by email and he told me he was thinking of having a holiday in the UK. We tentatively scooped out the possibility of meeting up when he did. As it was, we got to meet in person when I was in San Diego. It was a real honour. Richard was having severe headaches, so time together in the dojo was limited. We did get to do a little filming (I’ll embed it below), but the real joy was chatting with him on the Saturday evening. Richard’s martial skill and knowledge are obvious to all, but what impressed me every bit as much was his ability to tell a tale, hold court, and put a smile on the faces of all those around him (see picture). 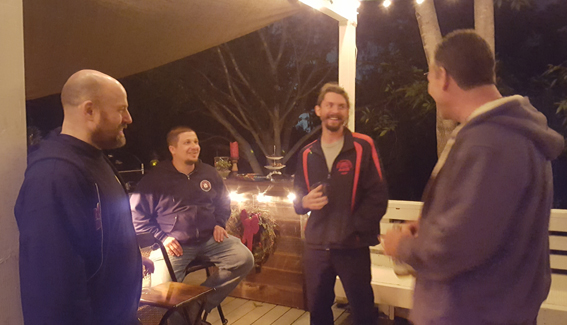 “A true martial artist is one whose smile will warm the hearts of little children, and whose fighting spirit will make tigers cower in fear.”

What Richard and Noah did with Waza Wednesday is really impressive. A massive amount of information shared. It seems very fitting to bring it to a close a year after Richard’s passing. I also can’t think of a better way to do it. A beautiful and moving video.

Thank you for sharing that final tribute. Quite emotional, even for someone who never met Sensei Poage, but through Waza Wednesday. I started watching Waza Wednesday about 4-5 years ago, just a few years after discovering Iain's material, and I always learned something new. I have gotten my inspiration from Iain's videos, Waza Wednesday, and One-Minute Bunkai, and it is my hope that the Waza Wednesdays will continue to be archived, as I'm sure I haven't seen all of them!! I am indeed sorry I was not able to attend one of his training seminars. As your video so clearly and beautifully communicates, Sensei Poage's inspirational and insightful teaching will live on through the practice, training, teaching, and work of his students.

Peace be with you and the Peaceful Warrior dojo,

Thank you for all the Waza Wednesdays, Noah. I have learned a lot from them, and I respect Sensei Poage for what I've learned of him through those videos and this forum thread.

For years now Waza Wednesday has been the highlight of my Thursday.

A special tribute to an undoubtedly special man!