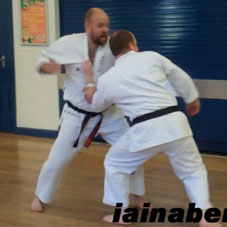 This clip shows a bunkai drill for the sequence of “blocks” found at the start of Passai / Bassai-Dai. The common explanation as “blocks” fails to explain why the hands on the hip need to be there and why they can’t be anywhere else. It also fails to explain why the arms need to come in before moving out, and why you would turn away after doing nothing to neutralise the enemy.

The second “block” is then completed by pulling the enemy’s chin around to crank the neck. There is obviously a need to be very careful with that in practise. As shown on the video, we can then finish in a number of ways. However, if we decide to stick with the example of the kata, we take the back foot around pull the enemy’s chin toward the hip (the function of the hiki-te). The next “block” can then be used to spike the enemy, and provide extra encouragement to drop, should they have managed to keep their feet or if they are taller than the person executing the technique.

This clip was filmed at a seminar in Bradford, Yorkshire on Sunday. It was a very hot and humid day and hence the camera lens misted up briefly during filming. You can still see what it going on and the lens quickly clears.

I hope the clip is of use to you and that you find it interesting.