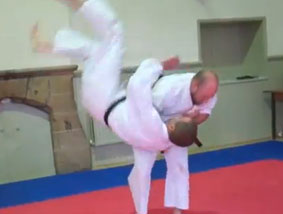 This clip looks at the shoulder throw found in Pinan / Heian Godan, the following shoulder lock, and a variation on the throw. It was filmed in the dojo yesterday.

The sequence we are looking at is commonly explained as a punch, a leap over an attack, before cross-blocking a low kick. There are so many faults with the common interpretation that it’s hard to know where to begin. One key and very obvious fault is the “punch” has you looking in the wrong direction. While it would be very foolish to deliberately not look at the target when punching, it is a very good idea to turn the head to facilitate rotation when throwing. The motion makes much more sense when viewed as a throw.

The kata presents “simplified snapshots” of the key points of the throw. Following the throw, the “gedan juji-uke” is used to lock the shoulder and the “jump” is simply positioning the legs to stop the enemy turning out of the lock. In the same way low kicks are often high in modern versions of the kata, the skip over the enemy’s body has became a high leap.

The applications of kata should always be viewed as examples of principle. Once the example has been understood, it is important to explore the many other ways in which that principle can be enacted. In this way the karateka does not become limited by the example. So at this class, having looked at the standard shoulder throw, we moved on to practise the two-handed version too.

I hope you enjoy the video and I’ll be back with more soon.