4 bunkai based finishes from behind the enemy (video) 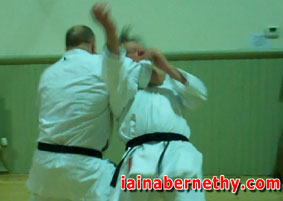 In this video I show four bunkai based finishes from behind the enemy. This was filmed in the dojo in March 2014. The main theme of the whole training session was gripping drills; so this was a way to get the students to repeatedly practise the same initial pass. The changing finishes give the illusion of something new and hence prevent the boredom of lots of repetition (“repetition by stealth”). The end motions are worth practising themselves of course!

The first finish is a simple takedown from Pinan Shodan (Heian Nidan). The movement to the rear in the kata does not mean you are being attacked from that direction, but that you need to be in that position relative to the enemy when executing the technique. The “block” is a shoulder grab, and the front kick to the back of the enemy’s knee will take them over. In Shotokan, the grip is taken with a straight arm and a side kick is used. Both variations work well.

The second finish is a throw found in Gichin Funakoshi’s book “Karate-Do Kyohan”. The throw is called “Kubi-Wa” (Neck Ring). While Funakoshi does not connect the throw to any specific kata, the motion is almost identical to what we see in Kushanku / Kanku-Dai.

The third finish is a one-armed strangle. I don’t see this technique existing in any of the kata I practise, but it’s an interesting technique and one that is part of karate as we practise it. It’s also worth remembering that no one would dispute that a roundhouse kick is a karate technique; despite the fact it is none of the traditional kata. It is a good technique that has been appropriated into karate at a later date than the creation of that kata. I see no reason why this process should stop. Indeed, I would say it is essential if karate is not to stagnate.

The final finish uses the opening motion of many versions of Naihanchi. While often ascribed no combative purpose, I see the motion as being a clinch and escape (see the “Beyond Bunkai” DVD for more details). It is also possible to apply the same technique form the rear in order to take the enemy over. As explained in the clip, if performed exactly as in the kata, uke will have a very awkward landing and therefore the motion needs to be modified.

One final thing to note is that our dojo has a high ceiling and quite an echo. The pocket camera we used struggles with this at times; especially when I’m turned away from the camera. Even though my instruction may not always be clearly audible, you should be able to follow what is happening easily enough. For the DVDs and downloads we use a professional camera crew and professional sound equipment … but this clip is free and you get what you pay for :-)

PS The YouTube link for the video can be found HERE

Practical Kata Bunkai: 4 bunkai based finishes from behind the enemy