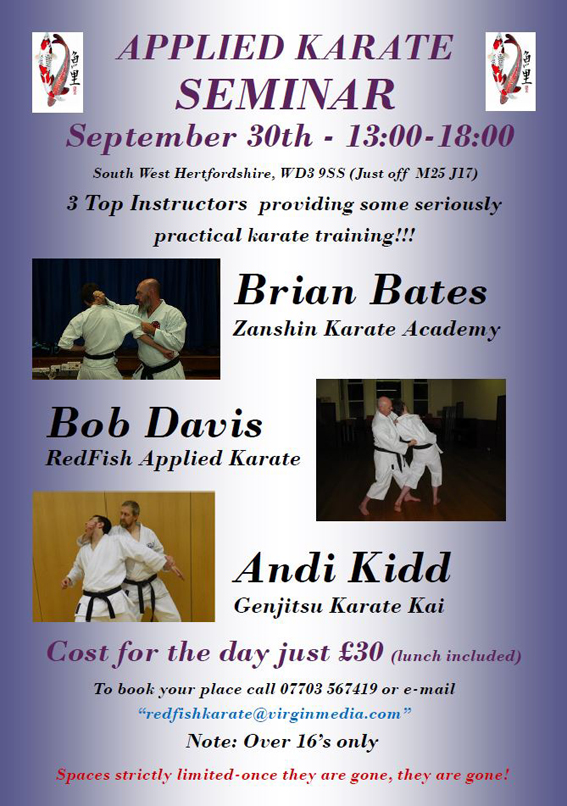 My error, I didn't put a location on the flyer, which may help

On the off chance anyone doesn't know who we are (it could happen :-) )

Andi Kidd is the author of "From Shotokan to the Street" and has been training in the martial arts for over 25 years. He is graded 4th Dan and is a fully qualified Instructor with both the British Combat Association and the World Combat Associations. Andi also holds a full instructors teaching certificate from Iain Abernethy, one of few in the world to do so. Although his base karate style is ...Shotokan, Andi has dabbled in many arts from Aikido to Western Sword fighting, bringing this experience to give a deeper understanding of karate. Andi has always been keen on getting top quality instruction and has travelled far and wide for it as well as getting many famous names to come and teach in his home town, including Vince Morris, Rory Miller and Iain Abernethy.

Bob Davis has been training on and off since 1978 (yes, he is that old!) and has dabbled in a number of arts but his first love is and remains Shotokan Karate and he has been back in serious training now for the last 20 years. He last graded to 3rd Dan back in 2011 but since that time has progressively moved away from the classical syllabus into a more pragmatic style of training. Bob is part of the Practical Karate Association and runs Redfish Applied Karate. Bob has organised his annual Redfish Charity Camp for the last 4 years and has hosted the likes of John Burke, Paul Herbert, Andi Kidd and John Titchen (plus many others over the years). Bob has also taught at the UK's premier bunkai event "The Bunkai Bash" for the last 3 years and is already booked for the next one.

Brian Bates has been involved in martial arts since the age of nine (1981). He started Shotokan karate with a local karate club run by Gary Jones affiliated to the SKI . Brian had a brief time out during his teenage years and resumed training with Richard Bygate of Bukonkai Karate International at the age of nineteen.

Brian has gained all of his karate dan grades with Bukonkai, his last grading being in July 2013 for 4th dan.Apart from karate Brian practices Aikido and gained his 1st dan in December 2015. From around 2012 Brian started to develop a keen interest in practical application of karate techniques and started to attend seminars with some of the countries top applied karate instructors. Brian has also been a regular attendee and instructor at the Bunkai Bash and the Redfish Charity Camps plus teaching at various Practical Karate Association events.

As well as gaining a deeper understanding of how the kata’s work Brian likes to pressure test the techniques and attended his first “sim” day run by John Titchen in 2015. This was an invaluable experience for Brian and he has made these a regular part of his training to further his development and understanding of practical/workable techniques.

Brian is a member of the Practical Karate Association and runs Zanshin Karate Academy schools in Bedfordshire.