Please find attached an article from the BBC concerning Freeze or Flight. A common theme discussed this forum but interesting approach when addressing the "general public audience" none the less.

It discusses replacing unhelpful automatic routines with helpful ones but also mentions luck. I would add Iain's "Pandora's Box discussion" in which underneath hope is defiance.

Thanks for sharing, very interesting.

The part on denial reminded me of this

An interesting article;  luckcan be more improtant than we thing however as Genral Montgomery once remarked 'you cant plan for luck'. 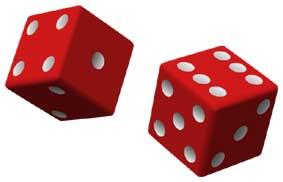 That’s a very good article that does indeed cover may of the physiological and psychological issues we discuss in relation to self-defence.

There should be no doubt that luck often plays a part in these things. However, it may be worth exploring what “luck” is.

Today we think of luck as a “force” beyond our control, but in the past, it was considered as being your ability to “sail you ship” through life. Sure, the tides and currents of life are beyond your control, but if you “sail” effectively you are more likely to fare better … and that ability to fare better was your “luck”. You could also have “luck” that applied to some areas of life and not in others.

This version of “luck” will be more in keeping with US golfer Arnold Palmer’s take on things when he said, “The more I practice the luckier I get.”

Did you see it? Watch it back and this time don’t bother counting the passes. Just watch. For most, they don’t see what is glaringly obvious the first time because they were focused on something else. The point being, that if you are focused on being “unlucky” then that’s what you are looking for and that’s what you see. The “luck” is there too, you just don’t see it because you are not looking for it.

We can all think of other examples. On a family drive once – while playing a game that involved scoring points for certain colours of cars moving in certain directions – someone remarked that you don’t see any orange cars, and we all agreed. For the next few weeks we see loads of orange cars, because we are now specifically looking for them.

Back on point, luck has three elements:

1 – Natural events and the actions of other people that are entirely beyond our control.

2 – Our prior preparation and experiences. This is something largely within our control.

3 – Our ability to spot opportunity and the right course of action during the interaction of the preceding two elements. Depending upon the nature of the interaction this can range from being wholly within our control to being wholly outside it. It’s this that most would define as “luck”. However, it is key to note that Point 2 will make some “luckier” than others.

In a self-defence situation, I will be “luckier” than most because of my prior preparation and experiences. However, that does not guarantee success because that will depend on the nature of the situation. There may not be any opportunity or course of action that could lead to success / survival in a given set of circumstances.

You may never smoke a cigarette and still get lung cancer. You may smoke 40 a day and live a long life. However, our health is not entirely a matter of blind chance. Choosing not to smoke will make you “luckier” when it comes to not getting lung cancer.  It’s the same with so many other things. We need to make ourselves as “lucky” as possible. As our forefathers would have said, we need to “acquire our luck” and “strengthen our luck”. We are then in the best place to both see and capitalise on the opportunities needed to live a good life and avoid disaster. There are never any guarantees, but we can tilt the odds in our direction. Whether that will be far enough depends on many things, but one of those things is us, our outlook and our prior preparation.

Quite a bit off topic to the original post, and it's probably been referenced here before but my favourite book on "luck" is Laurence Gonzales's "Deep Survival." It isn't about luck per se, but the common characteristics that he identifies in those that survive when others don't is very similar to those who seem to be lucky... My father was one of those. Much to his annoyance he was frequently told he was lucky to survive an incident that seriously injured a number of people. As he has been telling people for at least 60 years, there was no luck involved in not being run over by someone driving the wrong way down a one-way street. All he did was check in both directions before crossing becase, as he kept saying to me when I was a child "I know it's a one-way street, you know it's a one-way street, but the idiot driving the wrong way doesn't. And that's what matters. If you don't mind dying to prove that you were in the right, go ahead and cross without checking."