They were Father and son Michael and David Mc Conville. Planning and training for the tour had been intense for the four previous months and the eager group finally took off on tour 8th July 2015.

Tour leader Dan Redmond had made two previous visits to the Island home of karate and he was looking forward to meeting up with the Okinawan Karate Master Hanshi Tetsuhiro Hokama from the Okinawan village area of Nishihara.The first flight was from Dublin to London Heathrow and from there to Tokyo  Haneda Airport Japan.  It was in Tokyo that the group learned that all of the connecting flights to Okinawa were cancelled because of Typhoon Chan Hom in the Okinawa area. The tired group were treated very well by Japan Airlines who got them Hotel accommodation and told them to report next morning to learn if flights would venture to Okinawa.  Next morning they were checked in and allowed to board the flight but were forewarned that it may be necessary to return to Tokyo if thesevere weather prevented landing atNaha Airport in Okinawa.  On approaching Okinawa the turbulence increased and the pilot made two aborted attempts to touch down but eventually had to turn the plane around and return to Tokyo.  This experience was distressing for the passengers and screams of fear were heard above the noise of theturbulence.

Japan Airlines again found Hotel accommodation for the group who were advised to return to the Airport next morning to learn if Okinawa flights would take off.  Next morning flights did take off and although some turbulence did cause concern it was nothing like the previous experience and the group finally made it to Okinawa.  They checked into the Smile Hotel in Naha City and Dan Redmond then made contact with Hanshi Tetsuhiro Hokama.  Next morning he arrived at the Hotel and that day was spent touring the sites of Okinawa, mainly the monuments and shrines dedicated to legendry karate Masters, who had formed styles that are now practised at World level.

Hanshi Hokama was an excellent guide and most knowledgeable of the sites visited.  He was also very humorous and entertaining always being the joker.  A fantastic day and entertaining day that was much appreciated by us all even though very tired.

Many people believe that Mr Miyagi in the movie THE KARATE KID was a fictional character but in fact there was a real Mr Miyagi in Okinawa who formed the Goju Ryu karate style.  We visited the monument dedicated to him.

Other gravesites and monuments we visited were dedicated to famous karate masters Matsumara, Itosu, Matsomora and Higashionna.  We also visited the famous Shurijo Castle.  It was destroyed during the last war but was rebuilt in an exact replica as the plans of the original castle had been stored in a safe location.

We then visited Fukusyuen Garden, Tama –U –Dun National Heritage Centre and various other interesting sights such as the Peace Park.

We went to visit the Budokan which is the Okinawan Martial Arts Main Hall.

Arrangements were then made for our group to be training at Hokama Dojo and each evening that week was spent training and sweating in this traditional Dojo.

The style of karate practised there is Gojo Ryu and the group were able to experience the effective principles of this old Okinawan karate. Each morning the group met in a local park near their hotel at 7am to practice kata.  Sessions were taken by Dan Redmond 7th Dan, Steven Surgeoner 4thDan and Michael Mc Conville 3rdDan.  It being the rainy season in Okinawa the group was usually soaked during training by the sudden rain showers but although they were wet all agreed that it was amost enjoyable experience.

The group left on Wednesday 15th July to spend the final week in Tokyo City but before departure Dan Redmond presented an engraved plaque to Hanshi Hokama to mark our visit there and to thank him for his courtesy and training.

The final week was spent in The Princess Royal Garden Hotel in Tokyo City.  We decided that this final week would be relaxing and sightseeing without training. First on the list of places to visit were the Crossroads of Asia and the Sky Tree.  We also took in the Meiji Shrine, the Imperial Palace and Gardens, the graves of the 47 Ronin, the Tokyo Budokan Martial Arts Training Centre and Museum.

At this point the group decided to separate and visit places that specifically interested each individual.  A really memorable visit to Okinawa and Tokyo City.  We returned home on 21st of July and already plans are underway for another visit to the land of the Rising Sun at some future date to be decided. 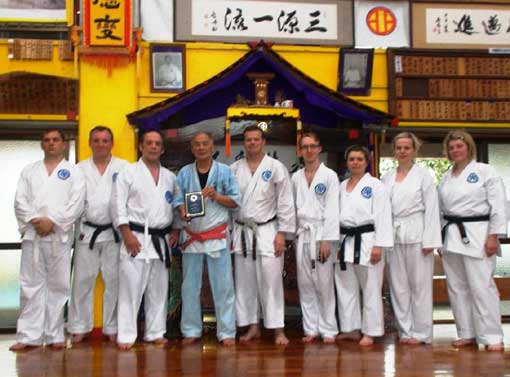 CKA group at the Miyagi Monument in Nah City Okinawa. 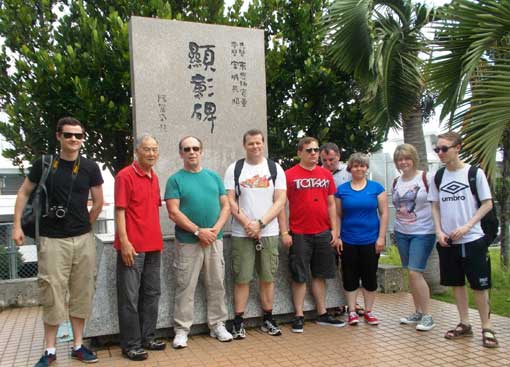 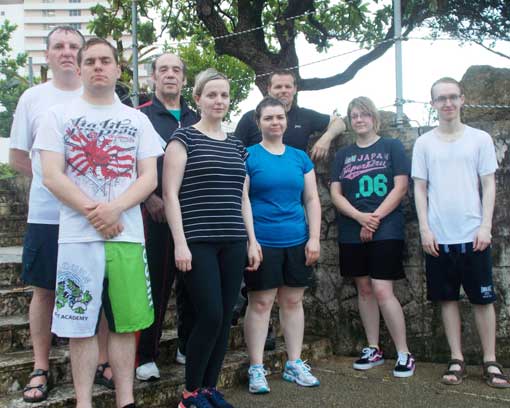