I ran across this old video of Heian Nidan and thought I'd share an observation.

(The channel has old videos of the other Heian katas too.)

Notice the folds of the knifehands.  Not counting the first one after the side kick, the next six knifehands are in three pairs.  In each case, the first knifehand folds with  the secondary hand pointing straight out, the way modern Shotokan does it.  But the second knifehand of the pair folds with the secondary hand swept back behind the head.  To my knowledge, this style of fold is only used in TKD these days, but it is interesting to see that it was once standard in Shotokan.

My bunkai conjecture is that the first knifehand of each pair is intended defensively.  The shuto blocks a wrist or arm, and grabs it.  The second knifehand is intended offensively.  You step in, retaining control of the secured wrist/arm, but with a kind of "high hikite" you pull that hand back past your head to deliver a neck strike.

For comparison, classic TSD folds a knifehand with both hands to the opposite hip (see here.  https://www.youtube.com/watch?v=Ph9ybOTMzbg )  Which I would interpret as a "low hikite" followed by a neck strike.

I don't have much to add beyond  the interesting (to me) historical observation.  If any Shotokan practitioners have insight as to when or why the official change occurred, I'd be interested in  that too.

Looking at Funakoshi’s books, there is no such distinction made between the knife-hands. We can see a change over time in the way this motion is done i.e. in Rentan Goshin Toudi Jutsu (left) his stance is a lot shorter than in Karate-Do Kyohan (right). There’s not much in the way of detailed description in Rentan Goshin Toudi Jutsu, but in Kyohan Funakoshi states the hand should come from the shoulder (reflected in the illustrations). It also shows the rear hand coming forward – as opposed to extending and then pulling back – making it unlike the version in modern Shotokan. 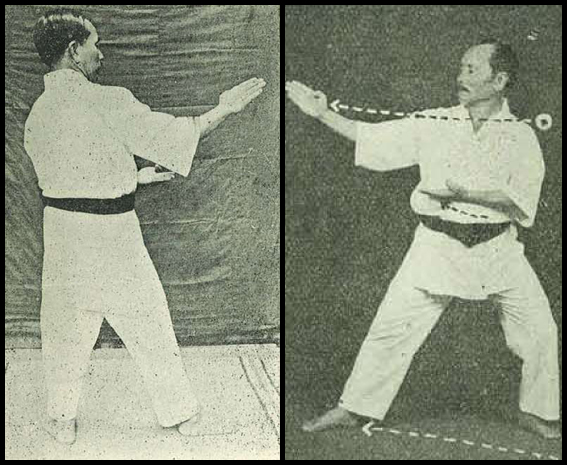 Heath White wrote:
To my knowledge, this style of fold is only used in TKD these days, but it is interesting to see that it was once standard in Shotokan.

You do see it in other places too i.e. I know of some Wado groups do the Shuto what way.

The inclusion of the two main variants in one kata is pretty sweet in my view. It helps ensure both the inside (wrap arm from the inside) and outside (push arm down from the outside) are explicitly in the kata.

Heath White wrote:
I don't have much to add beyond  the interesting (to me) historical observation.  If any Shotokan practitioners have insight as to when or why the official change occurred, I'd be interested in that too.

If we compare styles, we can be confident that both variations were widely practised. As regards to the specific developments in Shotokan, we can see that:

1) Funakoshi shows the back arm coming forward in Karate-Do Kyohan.

2) The version in the video above shows a mix of both methods.

3) Nakayama’s books show the rear hand fully extending and then retracting (relative to the practitioner’s body).

4) In Tsutomu Ohshima’s 1973 English translation of Karate-do Kyohan, he extends and retracts but it is palm up (see picture) – unlike the palm down extension in the Nakayama books – and he states, “the left hand comes to the front of the shoulder and then extend it forward as if sliding it along the right arm, simultaneously drawing the right hand back diagonally to the position shown in figure 30.  This is the left middle level sword hand.”

Drawing the hand back “diagonally” suggests what is described may have a slight circular action, making it somewhere in-between the main two variants discussed so far. 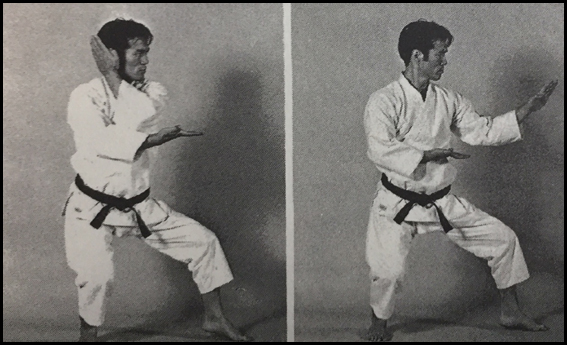 So, lots of variations! As Funakoshi said, “Inasmuch as there are not now, and never have been, any hard and fast rules regarding the various kata, it is hardly surprising to find that they change not only with the times but also from instructor to instructor”.

There have been variations in Shuto-uke past and present. While it can be tempting to think of a single linear evolution within Shotokan, it’s probably more accurate to think of multiple variations always being in existence alongside one another. The video may show an attempt to include both of the more common variations, before standardisation resulted in the “Nakayama version” becoming the norm.

Across all versions of the motion, we can see that the core concepts remain constant: one hand across chest, one arm striking, back leg bent, etc. That’s what really matters when it comes to application because the shuto will need adapted to enemy and circumstance irrespective of how it is done in kata. Given groups chose a “datum example” for the purposes of the solo kata so body awareness can be developed, but application demands the ability to adapt. As Funakoshi says in his 20 precepts, “Always perform kata exactly. Combat is another matter.”

Fascinating to look at the individual variations of course!

To give this some more “taekwondo-context”: as recently as 1968 in the book “Secrets of Korean Karate; Tae Kwon Do” by Sihak Henry Cho he documents both the What is commonly called the “taekwondo-chamber” (both hands chambered behind the centreline) and what is commonly known as the “karate-chamber” (one hand chambered in front and the other chambered behind). The author was trained in the Ji Do Kwan (wisdom way school) which again had roots in Early Shotokan, early Shinto-Ryu, early Shudokan Karate + Judo. I agree with Iain that the reason why we don’t see all chambers in all styles comes from a wish to standardise the techniques and forms. In my own training and studies I’ve found both chambers to be worthwhile and I’ve adopted many drills from Iain’s works into my own training and teaching as a result :-) It was the book 5years one kata by Bill Burgar that made me first aware that the “taekwondo chamber” was actually just a variation that was used in Karate a long time ago :-)

Also...in the TKD I do we have the "both hands back" chamber in the patterns (knifehand guarding block) but also the "hands crossed" chamber in set sparring (knifehand block) where the reaction hand is pulled back to the hip. So even today that variety in chambering or using the knifehand is still there to some degree.

I would add that even Keio University Karate Club (Funakoshi's first university club in Tokyo, these are his direct students) perform Shuto-uke differently.  Speaking to people who have trained with the senior Keio instructors, I get the impression that they are very much trying to preserve Funakoshi's karate.  However, they as a group perform shuto-uke both ways, and without asking these individuals "why" on the surface it does not seem there is a "standard" way of doing it.

This video of Heian Nidan shows the common chamber (but less exaggerated as it is often done today).

This video of Sochin shows the chamber closer to the "old way" with both hands being brought to the opposite side.

Personally, I have been taught both variants over the years.  In Heian Shodan and Heian Nidan, the series of four shuto-ukes (90, 45, 90, 45) were at one time taught to me as being jun-kaiten for the 90 degree shutos, and gyaku-kaiten for the 45s.  The jun-kaiten ones were perhaps not as exaggerated as the TKD version or what is shown in the Sochin video above, but essentially it was the same movement.  This clicked well for me when I first saw Iain talking about angles in this video.

What we have essentially are two slightly different applications for the non-striking (blocking) limb to clear obstructions:  pressing/trapping from the outside (90-degree, jun-kaiten), or threading/overhooking from the inside (45-degree, gyaku-kaiten).