Hikite is the Japanese term for “pulling hand”. Hiki meaning pull and te meaning hand. Due to the way in which Karate has evolved, the meaning and use of hikite have changed over time and the practical application to hikite has, all things considered, fallen by the wayside.

Nowadays it is common to see hikite being used to assist with “power generation”. Although no one has yet to fully explain to me how moving part of your body in the opposite direction of the target can accomplish an increase in power.

Let's take the basic reverse punch application as an example. From a practical perspective, two things start to tingle my spidey-sense.

The first is that the hikite is placed on the hip for no apparent reason. Common sense would dictate that surely my it would be better to have my left hand protecting my head as the enemy would more likely aim for my head than my hip. Also, I can probably take an unorthodox hip strike a couple of times, where as, one shot to my temple and I can be on the ground quicker than you can say Osu.

The second is that the punch is aimed at the enemy’s chest/solar plexus. Now there is nothing wrong with the chest as a target area. But what I began to realize was that the majority of straight punches found in Kata (at least the ones I practice) were aimed at the mid-level. Again, looking at kata from a practical perspective, it would stand to reason that the techniques in kata would focus on striking the enemy in the head and neck, where we can cause unconsciousness so that the enemy is unable to continue to fight no matter what pain threshold they may have.

With those two things in mind, I was reading Gichin Funakoshi’s 1922 book Karate-Jutsu (or To-Te Jutsu depending on the translation). In the section which describes hand techniques, Funakoshi writes that: - “Hikite is to use the opponents incoming punch and pull on it beyond its reach and to twist it at the same time, to throw the opponent off his balance." 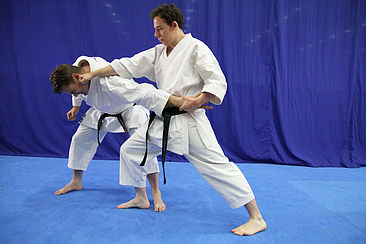 You can see from the image to the right, that I used the concepts detailed by Funakoshi, pulling the opponents incoming punch beyond its reach, which is why my partner is leaving forward and it gives an explanation as to why I put my hand on my hip. Also by twisting my fist so that the palm is facing upwards, my partner's arm is twisted further thus he needs to step and lean forward to compensate. With my partner leaning forward is head drops to my mid-level. Now, what looks like a mid-level punch is actually a punch to my partners head!

By taking the advice of Gichin Funakoshi, you can begin to practice the karate techniques as they were originally designed to be used and all parts of the techniques are used. Of course, Funakoshi is not the sole resource when it comes to the meaning and applications of hikite and I would advise you all to go out and research what other instructors have to say on this matter too. There can sometimes be more than one right answer.

P.S. For a video showing a basic application drill I practice, you can check out the video below. The drill shows also shows how we can use hiki-ashi, (ie the pulling foot) to pull the enemy’s leg beyond its range of motion in order to off balance the enemy!

It's an important bunkai concept.

Also, Hikite is perhaps the most often repeated movement we practice. It is part of almost every basic technique. Add to it the techniques where we pull our hand back to our chest (e.g. Shuto-Uke) or higher (e.g. Manji-Uke). It seems to be a very important principle in karate.

Thanks for sharing Leigh!