Kata in the Modern World: Seipai 2.0

Kata in the Modern World: Seipai 2.0

Long time lurker, second time poster. I write for Fightland and cover combat sports and martial arts. Some of you might have seen my previews and breakdowns of most UFC events. Most of the time I'm talking about boxing or kickboxing technique and martial arts strategy overall, but sometimes I get the chance to throw in a karate piece, which I love!

My Study in Saifa was posted here a while ago, this article is basically a follow up with the idea that formal, ritualized movements can be adapted to more commonplace, realistic scenarios.

Would love to know what you guys think--talking the applciations of classical forms is one of my favourite things to do :) 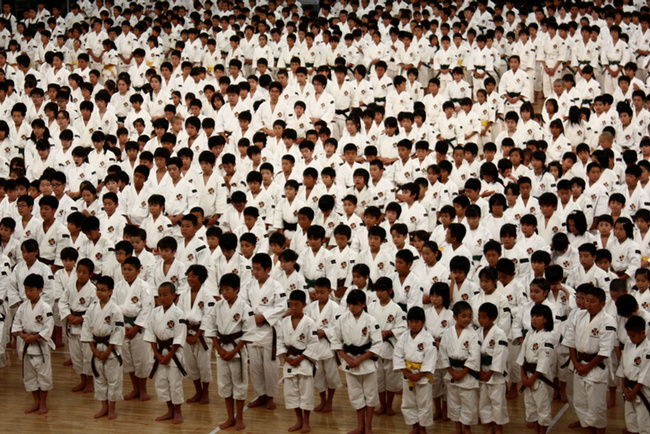 Karate is recognizable in the modern era as trumping up and down of a dojo, performing basic techniques in sequence.

There is little scientific or strategic knowledge to be gleaned from the basics and combinations which many karateka practice endlessly. It's good exercise, as it is in any traditional martial art—but it doesn't prepare the student to understand the actual fighting bit of martial arts any better. Where the real gems in traditional karate are hidden is in the kata—the forms.

Some of you will know my affinity for studying classical forms from my previous piece—A Study in Saifa. They perhaps shouldn't be a huge part of anyone's training repertoire, but for study and brainstorming—there's nothing better.

A form is simply a ritualized performance of techniques. But more and more often you will notice that the sequences in kata are more intricate than those practised in the repetition of basics. There are plenty of modern kata with little sense behind the movements at all—Gichin Funakoshi's mercilessly boring Taikyoku series, for instance. But the longer history a kata has, the more variations one can find of it, and the more ideas can be seen in action. Kusanku and Seisan, for instance, are two of the oldest kata out there—there are a handful of major versions of each, and hundreds of sub-variations.

While many see forms as a spiritual exercise or a practice fight, I see them as a historical record of “neat tricks” that someone else wanted to share, albeit in a fairly opaque manner, even once he was gone.

Anyone who has been in the martial arts a while knows that there's nothing new under the sun—but the beauty of combat sports and martial arts is that old ideas keep getting rediscovered or rehashed in new ways.

Today we're going to look at a couple of old fashioned applications from the (allegedly) Chinese form, Seipai, and talk about reinventing them for the modern era.

Broken Karate and the Seipai Dump

The single facet which has most damaged karate—and many other traditional martial arts—is working every defensive or counter offensive application against the utterly useless stepping straight punch or something equally wooden and unintuitive. Anyone smart enough to know that straight punches are superior to swings is not going to be dumb enough to step with his punch. The ven diagram meeting of people who are trained enough, and stupid enough, to use a stepping straight punch in the heat of the moment is pretty small.

The problem is, and always has been, that karateka don't take the good ideas from ancient forms and then contextualize them. There are good ideas being wasted because they're being trained in unrealistic scenarios, and that is a terrible shame. One of the finest example of this is the dumping technique found in Seipai. This is an application which most instructors seem to agree on.

In some variations—particularly in Shito-ryu—the arms are thrown out to the sides like wings during the lift and sweep, an effort to straighten the opponent's body in the air and ensure he lands on the back of his head or at least fails to breakfall.

Now this all sounds very wushu... but if you take it out of its stiff, ritualized form you'll realize you've seen it before. If you're into Muay Thai, you'll have seen this step in behind the kicking leg, lift, sweep and dump demonstrated hundreds of times by the great Saenchai. I would go so far as to say that it is one of the most important techniques he utilizes. Not only can it cause some damage as he attempts to drop the opponent on the back of their head, it makes the opponent look very bad every time he kicks and soon their kicking output drops off sharply.

The exact same technique, minus the deep stances and formal hand gestures. Get behind the leg, straighten out the kicker's body, lift and sweep.

But here's the vital difference—the context. Many karateka practice this technique as above—scooping a front kick from inside the body to outside in a manner which I don't think I've seen anyone pull off in live sparring, let alone a fight.

To get your hand in the back of the opponent's leg you have to drop it, so if he's faking and kicks high, or steps in and punches instead, you've got nothing to stop him. I highly recommend trying this with an sparring partner who actually wants to kick you, but won't kick you hard when you inevitably find that parrying across your own body in the wrong direction is near impossible against a strong kick.

Compare it with the way that Saenchai takes the roundhouse kick and redirects it straight into the position to do the dump. At no point is he unguarded.

Saenchai takes a roundhouse kick on his same side forearm—exactly as you would do anyway—then scoops his other hand under, trapping the leg. He steps back, drags the leg across in front of himself, then steps in behind it. He took the powerful dumping technique, andmanufactured a way to get there against the techniques that a live, resisting opponent will actually use against him.

Another variation, which beats trying to parry a front kick the wrong way, is to use it in a similar style to the wedge throw—stepping inside of an opponent as he moves in and picking him up from there. This appears numerous times in Mas Oyama's Advanced Karate and is demonstrated as part of a sticky hands sequence by Taira Masaji below. It is essentially an application of judo's traditional Sukui-nage.

FOLLOW THIS LINK TO READ MORE: Article continues to talk about the figure four armlock and whip over.

I don't have much to add, other than great article.  I love seeing applications from katas that actually look like the kata.  Not when you are shown an application that, even if effective, looks like something that the instructor just likes and then says that the "application was hidden" and that the REAL kata meaning for that application is backwards with missing parts and out of order from the kata.  I just don't buy it.

I think that work like yours and Iain's is very important to understanding what the applications might have been, or giving us tools to find meaning within the moves (much like L. Kane and K. Wilder's book on kata).

That really is a superb piece and I’m delighted to have you join us here. Thanks for posting!

There is very little I can add, other than state again that it’s a very sound, objective piece and I think that the images you’ve posted are superb in illustrating the points raised.

Seipai is not a kata I practise (I did a long time ago, but not so much these days). But, for what they are worth, here are a couple of my own thoughts on the bunkai of the kata. Hopefully they add a little something to, what on the strength of your article alone, is already a superb entry on Seipai and bunkai generally.

Jack Slack wrote:
The single facet which has most damaged karate—and many other traditional martial arts—is working every defensive or counter offensive application against the utterly useless stepping straight punch or something equally wooden and unintuitive. Anyone smart enough to know that straight punches are superior to swings is not going to be dumb enough to step with his punch. The ven diagram meeting of people who are trained enough, and stupid enough, to use a stepping straight punch in the heat of the moment is pretty small.

This is singulalrly the most awesome thing I have read in quite a while.  Thank you :-)

There IS a difference between Okinawan and Japanese versions of kata. Changes were often made to "hide" what a kata contained. For example, footwork or stepping contains references to meridian points. Where you stepped and the technique executed would show what meridian you were striking. Shotokan' founder Funakoshi was known for his Kyusho techniques. While Miyagi was a police officer. He-Miyagi used more grappling within his kata.

A lot of okinawan katas belong to southern styles like Bak Mei, White Crane, Southern Mantis, etc. Depending on your background, your kata can be used for a number of different methods. For example, I use different kata for hojo undo-weight training or iron shirt chi-gung. It also serves as a catalog of technique for weapons, joint locks, throwing, etc. taikyoku kata is an excellent source for grappling applications. Too many people think modern applications are better than traditional methods. The problem is that many modern karateka still spend hours trying to learn what was left out.