Hi my name is Malcolm and Iain has asked me to tell you a little about Kudo. I was fortunate enough to meet Iain at a recent seminar arranged by Lee Taylor. Whilst demonstrating a throw Iain referenced how Kudo practitioners may use the position to submit the opponent on the floor. Lee Taylor kindly informed Iain that I was the Wales Representative for Kudo in the UK and an open discussion about the possibilities for Karate-ka within the Kudo platform developed, so as requested I will share my view on this topic.

For those that have not come across Kudo it is a full contact sport which has evolved from Kakuto Karate.  In 1981, Grandmaster Takashi Azuma created Karate-do Daido Juku in Sendai City, Miyagi prefecture. Kudo tournaments have become best recognised by the full face protector worn by the participants. Fighters are able to use strikes (including head butts, elbows and knees), throws and submissions on the ground. The techniques used and taught by Grandmaster Azuma are from his knowledge base with Kyokushin Karate and Judo. Since then Kudo has attracted a mixture of different martial arts that wish to test their skills and ability.

Even though I have been studying Karate for 27 years, I have only been involved with Kudo for just under 2 years. Like so many, I originally stayed loyal to my style of Karate for well over a decade but I frequently found myself questioning the bunkai taught to me. I spent many hours pondering over what techniques would actually work in a conflict situation. After a number of years I could no longer convince myself that Karate was a semi contact sport and that Kata contained nothing but blocks, strikes and kicks. I left the style in the hope to influence others to see Karate as the self-protection system it was intended to be. Over the past 15 years I stopped practicing and teaching semi contact point scoring and dedicated my time to the research of Kata application. Obviously during this time I have been heavily influenced by the work of Iain and others like Patrick McCarthy. In order to put the Kata applications to the test I had head guards with full face protection manufactured and encouraged my students to spar in a way that was closer to a real conflict scenario involving grappling and ground defence.  Many of my students were happy with the class setup but a few wanted to test their skills at a higher level. These students tried MMA competition but did not enjoy the difference in etiquette at the events. Then one evening during a routine class I overheard two spectators trying to guess what martial art we were practicing. One guessed at Judo but the other stated it must be Karate as strikes were not allowed in Judo. In jest they said it must be both then “it’s Kudo”.  On arriving home I searched the internet for the term Kudo and found a number of YouTube clips. The fighting platform was perfect so I enquired about entering students in competition. I was so impressed with the art and the UK representative Sensei Muhammed Anas that I joined and have been recognised as the Wales Representative.

Since becoming part of the Kudo movement in the UK I have come up against mixed reviews regarding its competition platform. Some state that Kudo is ‘scrappy’ and lacks quality while others say that it is ‘as close to a real fight as you are going to get’. I have to agree with both comments. When a fight has very little or no rules at all, the feeling of safety goes out of the window inducing a state of panic.  The adrenal system kicks in and combative techniques are put to the test. Kudo competitions may not be popular with everyone but in my opinion they are far more exciting to watch than two Karate-ka waiting to land a perfectly controlled reverse punch followed by an emphasising Kiai.  Comments made by fellow Karate-ka are also interesting when they state that they cannot participate in Kudo training as it involves grappling and throws. It has been known in the past for martial artists to be suspended for participating in activities held outside of the organisation. This elitist attitude not only restricts the development of the student it leads them into a false sense of security.

In my opinion Kudo is the perfect platform in which to test the holistic nature of Karate.  It allows students to develop skills that fit their body shape and physical ability.  Students can choose a balance of striking and grappling that suits them.  Kudo competitions add up the weight and the height of the participants to form categories. This allows larger and stronger students a chance for an advantage in the clinch while taller, slender types still can use their speed and reach advantage. Karate students can continue their study into Kata, practice technique drills and then test what they have learned in live combat.  This is truly the balance between the warrior and the scholar.

Even though many Kudo practitioners have a Judo or Sambo background for the submission work there is more than enough throwing and grappling principle in Kata to give the Karate student an edge. The Kudo competition also compliments the self-defence principle of Karate by encouraging competitors to end the fight as quickly as possible.  If the fight ends up on the ground the competitor has to submit within a very short period of time therefore putting the emphasis on striking.  Karate students will also benefit from the types of striking as Kudo competitors will throw strikes from whatever angle they can which is a complete contrast the linear striking more commonly used in Karate. The equipment used in Kudo is also a key factor as it provides a high level of safety while allowing students to practice techniques that they cannot normally use, e.g. head butts.  It is possible to avoid getting a broken nose or cauliflower ears therefore meaning you can go work the following day without looking like you are part of a ‘fight club’.

Another significant benefit of Kudo is that it potentially provides an opportunity to unite the various styles of Karate and restore its original purpose.  It could help to put Karate back on the map as a realistic self-defence art and for those that wish to compete, a pragmatic amateur sport that could lead to a Mixed Martial Arts career. This is something that I am actively trying to promote as my passion will always be with Karate. I am trying to encourage all students no matter which style they practice to come and join the Kudo community. You do not have to leave your style of martial art to come along and pressure test your techniques. I hope that more Karate-ka can see the benefit of practicing Kudo and join me in my journey. 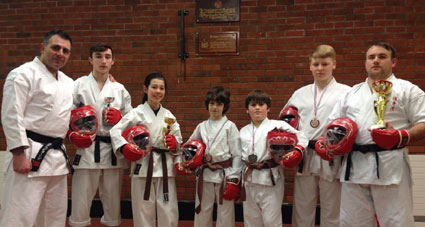 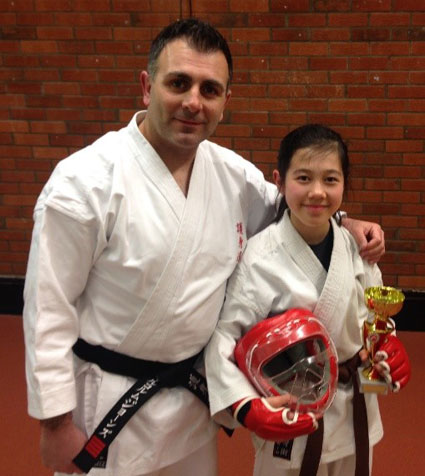 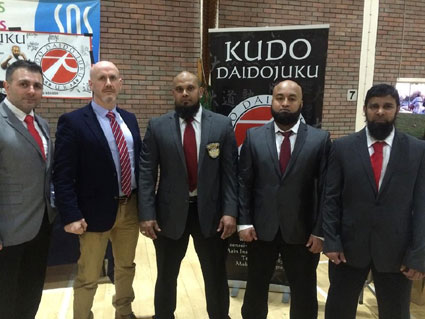 Hi Malcolm, I have a couple of questions for you regarding your experience with Kudo and the head guard if you don't mind.

Within my group we practise free fighting as well as sport contest style fighting it has always been this way within a adult grading when a student has to fight the option of free fighting is available as and when (they can do as they will within the time limit or until the fight is stopped by the grading panel for safety) No contest equipment is worn (unless for some reason it is required such as gum shield for a dental brace) and nearly all strikes are allowed within reason. This is a test of resolve and courage mentally and physically this is also the old way of doing things for most of the students in more modern times this is a real shock to start as we start them off with contest style of learning and build on the skill set as they get old enough or are of a level to play with the free fighting format. What I would like to ask is what the best/safest form of Kudo head guards(prices and links would be helpful) to practise with as their seems to be very little difference between what we do and do you find that when they wear the head guards they have a disregard for looking after their heads.

Sorry for the slow response, I have not been on the website for sometime. If you would like to drop me an email we can get a dialogue going or possibly a conversation? malcolmsensei@gmail.com