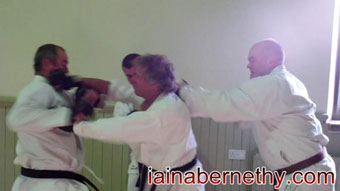 In our dojo we have many different types of sparring; each with specific goals and objectives. The purpose of this drill is to bring home the idea that “fighting” is not the best way to deal with multiple enemies. Tactical positioning and trying to escape are the best idea. However, the switches in this drill mean you are frequently starting from a bad position i.e. with one or more enemies having a secure grip.

Because the “gang” are allowed to attack freely, it also brings home how fundamentally flawed the interpretations of kata are that have the karateka surrounded, with the enemies waiting their turn to attack. Take away the choreography and it does not work.

The way to make use of kata in these situations is to get angles (which kata & bunkai teaches) and use the griping and striking skills we get from our bunkai drills to facilitate escape.

Real situations are chaotic and messy and hence the live drills we use to prepare for those situations need to be chaotic and messy too. A good rule for such drills is that if if looked "good" then it's not good. We need the chaos so was can apply method to the madness in a realistic environment. However, with sensible safety precautions they are no more dangerous than standard sparring.

Gichin Funakoshi describes making use of similar live multiple opponent drills – where he had to evade others and keep them at bay – in “Karate-Do: My Way of Life” where he said that, “It is hard to think of a better way than this to learn to defend oneself against more than one opponent”. So there is a traditional precedent for such live drills being a part of karate too.

This is just one of many multiple opponent and live drills that we make use of and I’ll bring you much more footage of those as the weeks and months go by.

I hope you enjoy the clip!