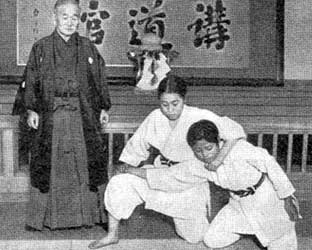 Just doing a bit of research and read the following from Manuni’s book on Seipai:

“Kata movement is meant to be used in a real encounter as it effectively uses physical strength, respiration and vital energy to mould technique. Kata is used against an opponent’s aggression and is similar to Judo’s Kime no kata.” – Kenwa Mabuni, Seipai no Kenkyu 1934

I though the comparison of applied kata (bunkai) with the Kime No Kata of judo was interesting. We can certainly see the integration of strikes, locks, throws, chokes, etc. being common between the two. Both are also self-defence focused (#). To the right you can see a picture of Kano overseeing the practise of the kata.

Below is a video explaining the Kime No Kata. If you skip ahead to the standing stuff we can see commonality with kata applications.

From Wikipedia: “Kime no kata (極の形) is a series of self-defense oriented katas in judo. Kime no kata, also known as Shinken Shobu no Kata (真剣勝負の形), "the kata of real fighting"), was developed at the Kodokan around 1888. The series is composed of 8 techniques from a kneeling posture (idori waza), and 12 techniques from a standing position (tachi waza). Both sets of techniques contain defenses for both armed and empty-handed attacks.

# - Although I do have my reservations about some of the stuff shown here ;-)

Good find, quote and video for demonstration.  I have always like the simplicity of many of Judo's self defense moves.

(Now that we have the technology, I have always wished that I had the money to have a judo person wear something that can be "green screened" out to see what full on movements would look like w/o the other body to see how many Karate kata movements would be seen.)

Judo’s Goshin No Kata would also seem to be another relevant to the discussion. Again, I’m not convinced by the practicality of all the kata includes; but it does show Judo’s striking, consideration of weapons, etc.

The Goshin No Kata was developed after the Kime No Kata (in 1956); so 22 years after Mabuni wrote the above comparison between Kime No Kata and kata bunkai. But it’s very much in the same vein.