On yesterday’s session we went through pre –emptive application for opening of Pinan Yondan. Sometimes we feel that the conversation with angry drunk lad in the pub wills end with a fight, therefore we take action straight when feel threaten in this case it was Martin (not drunk) reaching with his hands up, my job was to get to his head before those arms will get me. This is a learning stage so there is not much resistance, later on we remove compliance.

I like it a lot: Simple, direct, effective, and close to the kata movement. (And very similar to the application I see in this movement. :-) )

We have recorded follow up with 3rd and 4th movement for next week :) plus kake dachi and uraken for following.

I think this could be very useful as a defense and an offensive style entry into the clinch. I'm going to give this a try and see how it goes. Not too sure about using it pre-emptively but that's just my own preference.

This is a learning stage so there is not much resistance, later on we remove compliance.

This is more of a general question about your videos, but have you ever considered incorporating footage of the later stages of bunkai (when compliance is removed) into your technique videos? For example you could demonstrate the move first with compliance and then without? Just an idea, but anyway your videos have been very good so far, hopefully you keep making more.

Everyone have their own preferences, mostly what I share is open to interpretation. Often after my clip someone share their and then I change mine, as usually we are in a own training bubble and we need to look from other perspective. About later stage I was thinking about it and woven few times full contact and speed applications. I think the best example is our clip on development of Uki Goshi

I like it! I think this ties in nicely with the recent discussion on “Sen” (three types of combative initiative). Karateka have a bad habit of seeing bunkai are a series of counters to the violent acts of others i.e. Go No Sen is the only form of practise. Encouraging Sen Sen No Sen as shown here is far more effective, and in line with the guidance of the past masters. More on that here:

This “wedging in” – which we also see in the opening motion of Kushanku / Kanku-Dai (photo of Funakoshi doing it below) – is also to be found in the Bubishi. The poem that accompanies the picture (right side of image below - from Mabuni's 1934 book “Seipai no Kenkyu Goshin Jutsu Hiden Karate Kenpo") is as follows:

“Like two dragons playing the water, this man will win” (left)

“Like a single handed golden lion, this man will lose” (right) 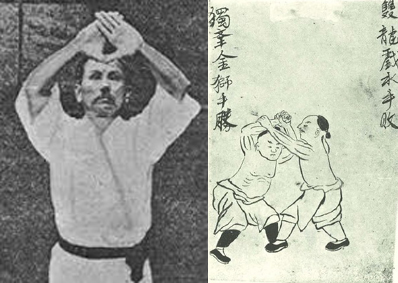 When you just have a poem and a drawing, much is vague and open to interpretation. Some translations of the Bubishi suggest this is a joint-lock, but neither the poem or the drawing suggest that to me (arm is drawn on the wrong side for it to be joint lock). Other translations suggest it is using a double handed wedge (“two dragons playing”) against the enemy’s single arm (“single handed golden lion” – possibly swatting downward?). That’s what I think is most likely being explained. That interpretation would match the opening motion of Kushanku / Kanku-Dai; especially the versions that lean forward:

This wedging action can therefore be found in both the kata and the Bubishi. It can be used pre-emptively (as it Les’s video above) and it can also be used as “default position” to try and regain the initiative should we lose it; as shown here (date on the video is wrong; it was 2016):

thank you, both hands posinion (pinan & Kanku) in my have very similar characteristics and function in my opinion.

Thanks for the clips from Kanku.

This is really helpful. After the initiative in kata thread I was going through various katas and this the opening move in Pinan Yondan was something I was having trouble adapting into something more pratical. I get to caught up in the positions as I have been taught them when really you have to perform the move badly, from a performance standpoint, in order to have a move that is pratical.

Thanks for your response Les. I really like that idea (shown in your uki goshi video) of having a five step progression where you gradually increase the realism. I think it would be good to see more Karate practitioners doing this, as many people stop at step two and never go further. I think I might give this progression a go, and I think it could also act as a gradual and suitable way to introduce people into full contact training of bunkai techniques.

I would like to see it too, but I think fifth stage is not good for video demonstration, as often given technique is transformed to other as your partner is resisting and responding to your moves. Things like that don't go well on clips.

I will try to record more stuff from our training, it won't be pretty :)