Over the last few years of watching MMA fights and Street encounters caught on film, I have just started to pick up on something.  In about 80 to 90 percent of all cases.  There always seems to be a point, where the stand-up striking/grappling or Ground and pound/ part of the exchange opens a small windows for disengagement and escape.  No one seems to take it but in my opinion this would be where I would get out of there.   Should this be where we place our focus on the physical part of self-protection?

Are you able to provide any links or videos to maybe better illustrate the "small window"?

My hope is that these videos illustrate my point.

In this one I feel the whole thing was avoidable but around 5:15 or the guy on top was in control with ground and pound and could of easily gotten up and retreated.

Ok this one was a 1 on 1 conceptual fight but still guy on top was in control again ground and pound.   If it was a self-protection situation.  Around 1:20 get up and leave.  Again it was a fight not Self-protection.

I may be wrong about this on but around :50 the guy in white had the chance to at least go for the escape, but because he was trying to win, kept fighting.

Yes I know that most of these examples are fights but they do seem to have income with self-protection that small window of escape.  No one seems to take it, but that is a different discussion which we probably should have.

Again these are just my observation.

What I have noticed is that the objective/mission of the parties involved are clearly to win the fight. I don't think anyone is thinking of escaping. What I tend to see is that self-protection situations seem to begin and end very fast.

What I would sayis that if you train for self-protection, practice escaping during your training. "Fight to Flee" compared to "Fight to Win". I think it all comes down to mindset and looking for the "small windows" when training.

I agree.  I also have to say, that although I enjoy my training in both Karate and Jiu jitsu, It did take me a long time to come to that realization.  Although I have heard many times that both fighting and self-protection are different, I guess I never really believed it even though people much smarter then would explain that point on this forum or other venues all the time. For some reason, now I really do believe they are different and need to be trained differently.  I know this all sounds pretty lame but it took me a long time to understand this.

Leigh Simms wrote:
What I would say is that if you train for self-protection, practice escaping during your training. "Fight to Flee" compared to "Fight to Win". I think it all comes down to mindset and looking for the "small windows" when training.

I totally agree. This is one of the main reasons why fight training is not good self-protection training.

A – There’s an assumption a physical response is the totality of what it needed, and the skills associated with avoiding a fight are not valued or practised (i.e. “If all you have is a hammer, then every problem is a nail”).

B – The focus is on “winning the fight” as opposed to ensuring your safety in a way that is legally justifiable. To “win the fight” there needs to be a fight. And being involved in a fight is neither legal nor safe and hence should not be the default position. If you don’t practise escaping, you won’t be good at it … and you’ll probably never even consider it because it’s not been part of the training paradigm (as this thread is discussing).

This podcast covers this widespread failure to carefully define the goal, and hence the most efficient ways to achieve that goal:

This old article also talks about the need to practise escaping in self-protection based sparring:

diadicic wrote:
Although I have heard many times that both fighting and self-protection are different, I guess I never really believed it even though people much smarter then would explain that point on this forum or other venues all the time. For some reason, now I really do believe they are different and need to be trained differently.  I know this all sounds pretty lame but it took me a long time to understand this. 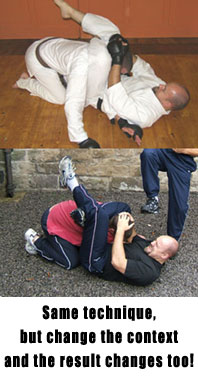 You are most certainly not alone. Part of the problem in communicating this is the fact that people know their fighting skills work. They make them work every time they train. Add to this the fact that they are probably training for a single goal (winning a fight) and hence their training only ever touches upon that one context. They therefore have a good solution to the only problem they face, and hence suggesting this solution is not good for other contexts – contexts they have zero experience of – is rejected as not being in keeping with their experience.

Tribalism also kicks in because to suggest that the optimum way of achieving one objective is not the optimum way to achieve all objectives is heard as, “what you do does not work”. And they know it does work … what they often don’t know is that it may be radically different when you change the context.

As I’ve said before, the question of whether something works or not is utterly meaningless unless you ask the additional question of “works for what?” I do loads of things that work great in one context, but would fail catastrophically in another. There is no universal solution to all the varying types of conflict.

We should understand the specific problem and train in the most practical way to solve the problem. Instead, what we see so frequently in the martial arts is people taking their pre-existing solution and trying to reinvent the problem to fit that solution. When it comes to dealing with criminal violence, the term “street fight” being used as a synonym for self-protection is the most widespread and insidious example.

This failure to differentiate between contexts is undoubtedly the biggest, and most widespread, failing in modern training.

So the odd are stacked against this message being fully embraced – despite the huge benefits there are to be had both in terms of functionality and enjoyment of all facets of the martial arts – so it does not sound “lame” to me at all. All we can all do is keep communicating the message in the hope that more and more people accept its validity and utility.