While browsing Youtube, I encountered videos about this guy named Troy Price. His way of showing things was fascinating to me, maybe because I have not seen anything like he shows before. Many elements are familiar, but the way he just keeps just hitting and hitting and hitting continuously in such a flowing manner is different from maybe a more rigid karate standard that I am used to.

So I made a quick search on this forum, but could not find any info about Price. So has anyone met and trained with the guy or trained in a similar fashion? And what do you generally think about this continuous flowing (counter)attacking thing?

Here is a link for one of his videos, in case you have not seen him:

I like Troy's application of karate, I was invited to few of his seminars but distance and family life did not allowed me to join.

Browsing through his channel you can find quite a few nice techniques, I did take few things to my own training.

I hope that in the future I will be able to join one of his seminars.

Thanks for pointing to his video. I found another one that shows some more of the the flowing manner in which he applies all the mean stuff we love:

I haven't checked out his Youtube channel yet, but I did receive a dvd with some of his flow drills at a seminar in North Carolina.  I really enjoyed it.  In particular, I remember that he demonstrated some very creative (and brutal) ways to set up knee strikes.  Great use of low kicks too.

ezzi91 wrote:
So has anyone met and trained with the guy or trained in a similar fashion?

I have met Troy and some of his students when I was in the USA (to the right of me in pic). Good guy. He’s a well-respected teacher with a good sense of humour. As you’ve observed, he moves really well too!

ezzi91 wrote:
And what do you generally think about this continuous flowing (counter)attacking thing?

I think that’s how bunkai should be done. The enemy should never get a “turn” and it is my view that every kata motion should create advantage, maintain advantage and exploit advantage. The flowing should stop when the chance to escape arises, but prior to that point, continual advantage is very important. I think Troy demonstrates this really well. 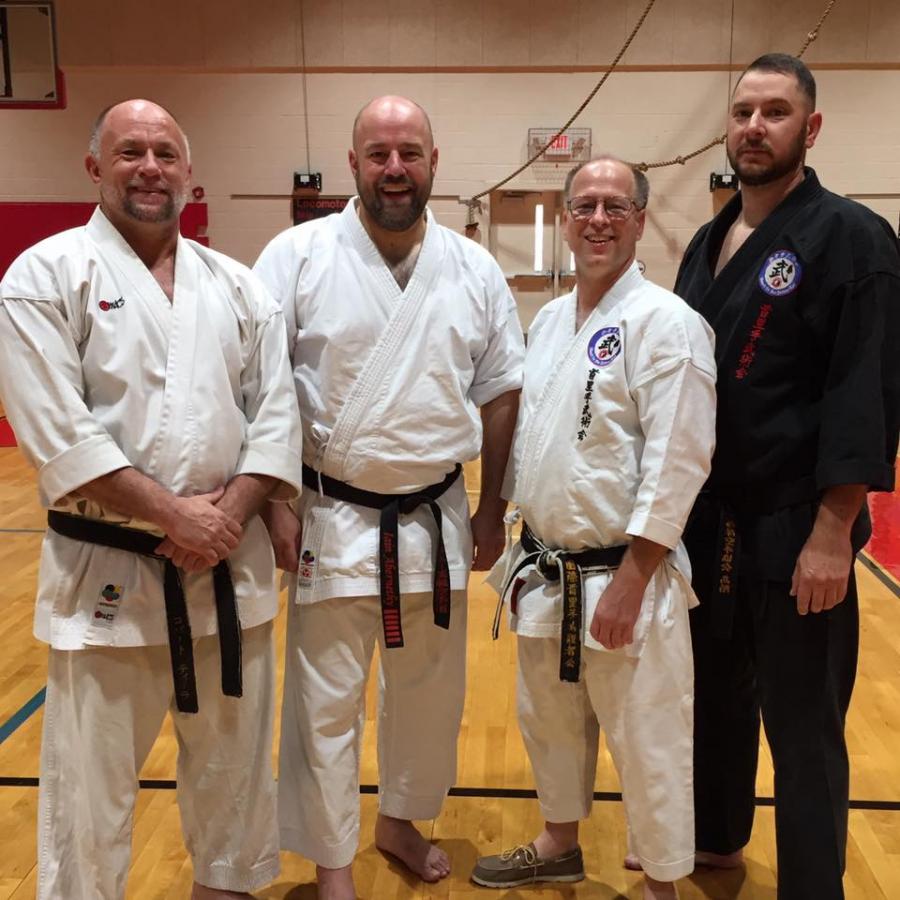 A lot of the kempo type karate lineages make a big thing about this sort of multiple hit flowing type of striking and often have sets that are 10/20 hits long. A couple of things that bother about it are...combat is so quick and chaotic I'm not sure how far forward you can see into the future to know where to strike. Of course some reactions are likely (knee the groin and the head can come forward) but in reality I think after the first couple of hits you are then problem solving with what you are given rather than a set sequence. Also...the first demonstration is falling into one of my bugbears about demonstrations...Troy is moving at 100mph while his partner is moving at 5mph. When both are fighting with equal speed and intent the ability to flow becomes much harder I think. And finally incidental hits (with little or no "wind up" or room for power generation) are fine but seeing as people routinely walk through pretty big hits I think sometimes it pays to consolidate position and aim to really land a good one (rather than a couple of OK ones).

I have met and trained with Troy a few times. First, I have to say the man is a walking library of martial arts knowledge and experience. He is accomplished in a number of Okinawan, Japanese and Chinese styles giving his approach an interesting perspective. I was impressed at how he was able to compare and relate movements from Chinese and Okinawan forms. He's also a very nice and genuine person!

Mr. Price does move quite well. Unlike anyone else I've seen. I was most impressed with his fluid combinations of locking, striking and throwing (as seen in his videos). His Chinese and Jujitsu backgrounds are very apparent in the way he applies his Karate. It gives a certain flavor to what he teaches. What is not always obvious in the videos is his ability to quickly transition between each of these skills in an unscripted way. In person it is fun to watch him answer questions and teach while controlling his opponent with a joint lock, throwing a strike that becomes a collar choke, and then throwing his opponent before he even has a chance to resist the choke!

I do find the rapid-fire repeating strikes with the same limb a bit questionable when it comes to self-defense. In my experience, striking with a right punch and rolling into a right elbow, right backfist, etc. is VERY difficult to do with power and accuracy. I have found that I'm much better off focusing on a single strike with intent and commiting my body behind it. Then following with another. A more "traditional" style of combination. But his way does seem to be effective at keeping the opponent on their heels.

Training with and watching Mr. Price strike in this fashion did teach me to look closely at every part of a movement. I now question how I can use even the most subtle parts of a technique which I would have previously overlooked.

Troy Price is one of a handful of of martial artists whose seminars I would attend again. If you have the chance to train with him, you will experience something different and it will not be a disappointment. If you don't have the chance, and you're interested, he has quite a few DVDs covering his methods.

. And finally incidental hits (with little or no "wind up" or room for power generation) are fine but seeing as people routinely walk through pretty big hits I think sometimes it pays to consolidate position and aim to really land a good one (rather than a couple of OK ones).

There are several possible things that can be achieved with a punch. It can reduce the opponents ability to fight by inflicting debilitating pain or crippling injury or knockout. It can delay an advance while you set up for something else. And it can be a distraction, to bring focus to one area to remove the guard from another. In the latter context, I think it's fine if there's no power there if power generation is impossible. It's like kicking off the leading leg. Not much power there but it's fast and serves as a distraction.