A most will know, I’m a great believer in Judo’s ability to “fill the gaps” in modern karate training and help return the art to being the more holistic system it once was. While the study of pure judo is a great thing in and of itself, the practitioner of other systems is more likely to want instruction on the parts of judo that best fit with their existing skill set. It’s therefore a great opportunity when Olympic level judoka such as Sophie Cox move outside the sphere of Judo to offer instruction to other martial artists!

I had a chat on the phone with Sophie last week and I asked her to send me her details so you’d all be aware of this seminar opportunity. Sophie is now teaching both MMA and TMA practitioners who want to add fuctional judo / grappling skills to what they do! I’m also sure you’ll enjoy the videos below. I’ll post more when they become available.

Note for Karateka: The koshi guruma shown in the first video can be found in Pinan / Heian Sandan (midpoint turn). Sophie’s superb instruction and demo on this is a great illustration of how judoka can help pragmatically minded karateka advance their art.

Wherever you are in the world, you can contact Sophie via email to organize a seminar etc.

Background: Sophie Cox is a British judo player from Rochdale, Greater Manchester, England. She represented Great Britain at the 2004 Olympics in Greece. In July 2011, she won the silver medal in the European Judo Championships in Germany. After five years out, and a long spell teaching English in Thailand, Cox won the British title in January 2012 and again competed in the Olympics.

Sophie in her own words: 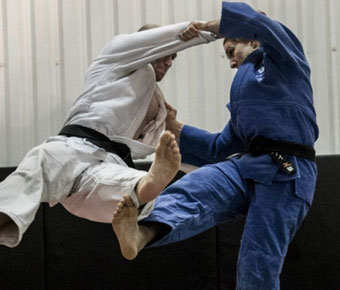 “I have been practicing and competing in the martial art of judo ever since I can remember.  My club is in the small town of Bacup, the depths of Lancashire and one of the last places you would expect to find a very successful judo club. The legacy that has been built at this club is a tribute to its founder members and the current coaches/players that still attend, as well as all those that have passed at some point through its doors. I have been lucky to have been coached by masters of the discipline, both male and female and have trained as a full time athlete for around 5 years.

My background is competitive judo. That is, the judo that is now an Olympic sport. I was trained to fight hard and win matches, not necessarily to master the forms absolutely correctly and not always carrying out the ‘winning’ in what would be seen as correct judo etiquette.  The emphesis is on randori, but not always randori as it should be if we were staying true to the strict translation – more like competitive style randori. The advantages of this were I learned to fight and to fight hard, to never give in. I have been pushed to breaking point many, many times. The disadvantage is that maybe I skipped over some of the original essence of judo, the judo (gentle way) that Jigaro Kano envisaged as an educational tool for life.  I also had to play by the rules most of the time.

I started to broaden my horizons when I went to Thailand at the age of 23. I embraced the more spiritualistic Asian Buddhist philosophies and learnt more about mindfulness. This contrasted with my want to win and push for success all the time. When I started Thai boxing I was as much interested in the why as much as the how. I wanted to know what traditions the techniques were based in, the Wai Kru and the ancient Thai warriors. On my return to England I started judo again, with the goal of competition in another Olympic games. I was lucky to be working with a good Japanese partner and a coach who had stayed there a long time and was happy to strip in back to the basics, the katas and the principles of training. Since then I have happily explored the relationship between modern and ancient judo and how judo specific techniques can be translated into everyday life as well as other martial arts. My aim is to continue teaching judo and to learn all the time about how best to apply it in other areas of life. Minimum effort, maximum efficiency, the mantra of Jigaro Kano.”