I’m in need of a little help and I have a favour to ask. Last year Rhys (my 7 year old son) saw a documentary on the plight of injured soldiers and it obviously had an effect. A couple of days later he was at swimming class and noticed poster for an event for the Help for Heroes charity. It is a charity that helps wounded servicemen and women and you can find more details below. Rhys announced that he wanted to do a sponsored swim to help. This was entirely his own idea, and being proud of him for thinking about the plight of others we helped him set it up.

He can be a very stubborn lad (a trait of his that I really admire, but don’t tell him I said that!) and, although the target was 64 lengths (1 mile), midway he decided to go for 100! At 72 lengths we insisted he stop as exhaustion was fully set in, but he was adamant he wanted to keep going! I’ve copied some text from the newspaper report of the event below.

As proud as he was of the £366 raised, Rhys decided it was not enough and announced he would be joining his uncle in a New-Year charity dip in the sea at Whitehaven docks. It was freezing cold but he ran straight in (see picture below) and raised another £200 (extracts from newspaper report copied below).

Rhys then said he had set himself the target of £1000 before he turned 8! The next event is therefore a walk from our home to his maternal grandparents’ home 14 miles away … which is an extremely long way for his little legs! I’m going to accompany him and he has set the date of the 27th of February. 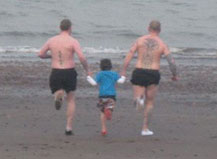 It would mean so much to him (and me) to see him reach his £1000 target. As I say, every single part of this has been Rhys’s idea and I’m naturally very proud of him picking a cause, setting his goals and then pushing himself to meet them.

It was Rhys who asked me to see if my “Karate friends” could help; hence this post.

I know times are hard for everyone but if you could see your way to giving a pound or two via the webpage recently set up for him that would be fantastic. If you have no cash to spare, perhaps you could spread the word on this and help out that way? All assistance, no matter what form it takes, will be hugely appreciated.

I hope nobody objects to my using the site for such a personal appeal. However, if you could make a donation to Rhys’s event then you’d be helping a good cause and making a young boy (and his dad) very happy!

I’ll keep you updated and thanks in advance to all who help out.

PS Rhys was interviewed by “Tim” for the British Forces Broadcasting Service this week. That interview will air this Sunday (16th of Jan) at breakfast (around 9:30 ish we were told). Those in the UK with satellite TV can listen to it on channel 0211.

"What is H4H all about? It’s about the blokes, our men and women of the Armed Forces. It’s about Derek, a rugby player who has lost both his legs, it about Carl whose jaw is wired up so he has been drinking through a straw. It’s about Richard who was handed a mobile phone as he lay on the stretcher so he could say goodbye to his wife. It is about Ben, its about Steven and Andy and Mark, its about them all. They are just blokes but they are our blokes; they are our heroes. We want to help our heroes."

The charity Help for Heroes was launched in October 2007 in response to the desire of ordinary people to do something practical to help our wounded servicemen and women. As individuals we are powerless to prevent war and we feel helpless that we are unable to stop our men and women from being killed and wounded. By joining together as Help for Heroes, we are doing something practical to help; we are doing our bit.

A seven-year-old Cockermouth boy swam more than a mile in his local pool on Remembrance Sunday, raising more than £350 for armed forces charity Help for Heroes.

Rhys Abernethy was joined for most of the way by his older brother David, who is nine.

Rhys swam a total of 72 lengths of Copeland Pool in Whitehaven, where he goes for swimming classes.

Over the last few weeks he registered with Help for Heroes before gathering sponsorship from friends, family and swimming teachers.

His proud mother said: “Rhys said he wanted to do something on Remembrance Sunday for Help for Heroes. A mile is 64 lengths but he ended up doing 72.

“I think he got the idea from a programme on TV. We’ve also got a picture of my grandad here at home. He’s in his kilt, he fought with the Highlanders.”

How about this for a New Year resolution? Rhys Abernethy aims to raise £1,000 for Help for Heroes before he turns eight on April 27.

The plucky Cockermouth youngster is already more than half way to his target.

Rhys completed 72 lengths of Copeland Pool at Whitehaven in a sponsored swim on Remembrance Day. This raised £366.

He was back in the water again on New Year’s Day, this time at , bringing in a further £200.

Rhys said: “It was freezing but I was in the water for only a couple of minutes. My school friends don’t know I’m doing it but I got all the teachers to sponsor me.”

He was inspired to raise money for the armed-forces charity after seeing a Panorama documentary about soldiers’ injuries and the difficulties they have in adapting to a normal life as a result.

None of his relatives are serving in the forces although his great granddad, Jack Reid, fought with the Highlanders in Malaya and in the early 1950s.

Rhys’s mum said: “The programme made him want to do something. He’s a good lad. He likes to do things like that to help people.”

His next project is to complete a sponsored walk from Cockermouth to Whitehaven, a distance of 14 miles.